Been working hard on Daddy Lightning at SAW. This is a recipe for mixed emotions. 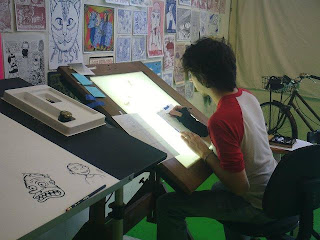 A BLAST. After 5-8 years of comic strips, and 50 pages of Banks that was mostly free-form, this is the first story I structured before I sat down to draw it in a while. It's nice to return to that form. To serve Master Discipline, to mark the pages yet to draw, to cross them off, to take each stage to the next. 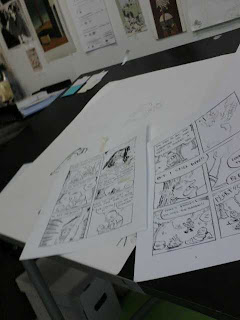 PAINFUL. I'm drawing comics of me and her in competition. This was a fun idea, once. I don't know what to call it now. But I gotta finish it, and I've always been one to affirm the you that you once were. It's who I was, so I have to set it down. But I'm not that person anymore. It's the biggest rift between person who came up with an idea and person who has to work it through that I've ever had bridge.
EXCITING. A great new book with a great interesting publisher. Debuting at Mocca, etc. Always nice to have a good new book out.
WEIRD. It will be the same size and shape and just 8 fewer pages as Hutch Owen's Working Hard, my first book, and I'm making scattered text pages and celebratory shout-out pages and what-not, it will look and feel a lot like that first book, a book I love and loved, also the product of intense emotions, and that I finished like a race.
SAD. I keep drawing this infant that was barely a version of her even when I sketched it. Now it's the only one I know, and my only connection to her, but I rush through it. I can't believe this is what I'm left with.
STUPID. I should be parenting.
SICK and WRONG. There's this part of me that sees Rosalie's death as yet another in a long list of failures. And somehow this makes it easy and almost unimportant within a certain part of my emotions. I spent most of 2003-2007 doing Hutch Owen as a daily newspaper strip. A good strip. Maybe not as good as Calvin and Hobbes, but as good as anything else out there with anything to say. I worked hard to sell it, constantly, using every resource I had. I dedicated my creativity and intelligence to that form and those characters. It ended unceremoniously in 2008. For the rest of 2008, I spent trying to sell Ali's House which again I dedicated all my passion and creativity to. It died as soon as it reached the launch pad. How To Say Everything took up most of my 2009 and couldn't find a publisher. It lies 90% finished and with me standing completely behind it but not finishing or marketing it. The Hutch Owen collection of the best of the 2005-2007 strips has yet to see print and I have no idea what the status of that collection is. All of these failures I shook off. There were easy to bounce back from. I've always held to my own values and standards and I usually believe I'm on my right personal path regardless if that is in sync with the world's commercial path. And so what took up my 2009-2011? Rosalie and starting SAW. SAW is taking off fabulously. And Rosalie?  Another project that failed to take off. I soldier on. I draw comics.

Here's a Freudian slip. That's me, below, wandering the darkness. I forgot to draw the baby on my back. 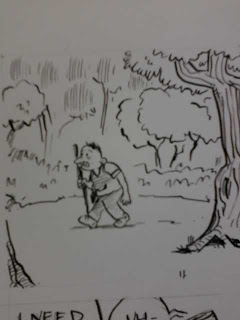