Part 6 starts here, and I'm starting to understand Lodi, and figure out how Banks can get close to her. Sketches are below, and then a block of text that probably is more relevant to the late December postings. 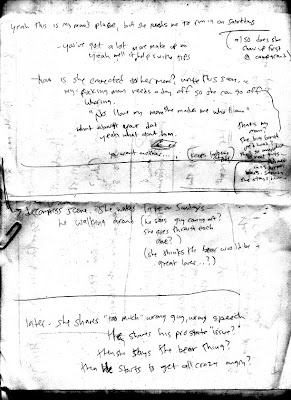 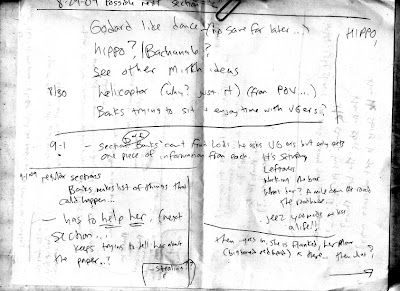 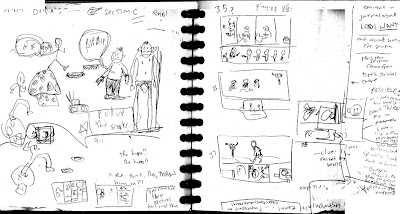 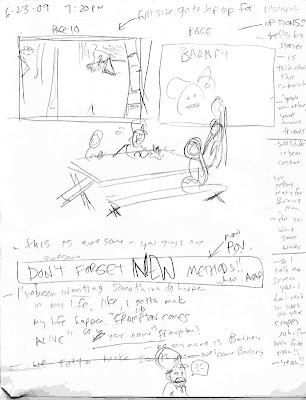 THE FINAL SKETCH, AT BOTTOM RELATES MORE TO THIS POSTING

after two weeks (or so) off to get various errands done, woke up early and began doodling/writing. After a look at the index cards (the ones at right felt right for this point in the story), I doodled a sheet (see scan) and came to ideas about the new section. I knew this section was about Banks and Lodi getting more friendly, but how, and what changes, and how to keep it lively, fun, engaging, deep- all that stuff?

On these sheets, I tend to start from an upper right corner? Why?! I don't know- I think I tend to think the notes I'm writing will later be minor notes and the real notes can go in the center where important notes belong. Invariably, I wind up creating a maze of ideas and events and images that I can barely follow. But it seems a good way to sow a little disarray to think in new ways about the material...

At some point I realized I would end this section again with an exclamation from a video game player. From in the latrine. I have to be careful this doesn't become a trope, but my annoyance with how often I use this idea could force the Barney Banks character to rebel even sooner than I have been thinking.