When three pictures lock into place... 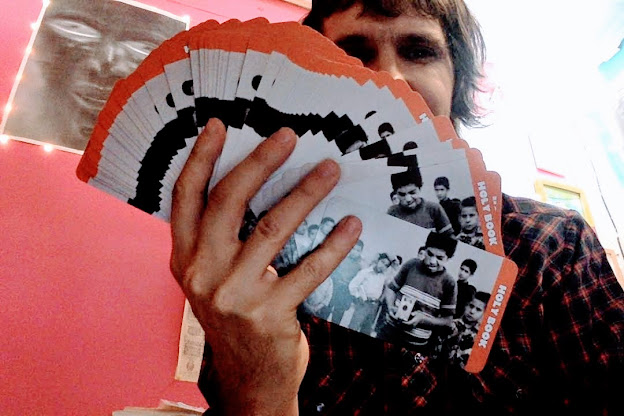 I love my card decks ! I've got three decks like this that I mix together. Each has about 140 cards.

I am always looking for new ways to use them. Recently, after moving house, I started a new ritual,  keeping three cards on a rack in my drawing space, each morning pulling a new #3, while retiring #1 and putting #2 in the #1 spot.

Here's one of the first, a grim beginning, with one of the grimmest cards in the decks in the center. 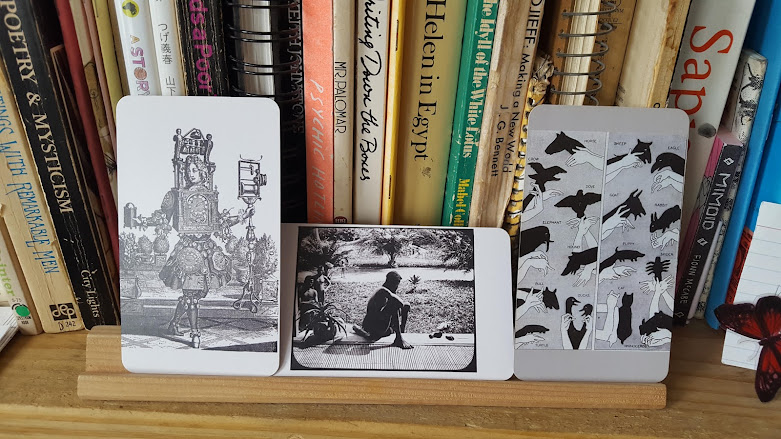 All black and white. The mechanistic westerner on the left. The Congolese man looking at his relative's (I think a son's or daughter's) chopped-off (by the Belgian colonizers) hands on his porch. The hands freed to make new life on the wall. I don't know what that sequence means- some sort of rejuvenation, or second life? I don't want to make light of trauma at all, so I'm not inclined to believe that interpretation.
The next day I don't seem to have a picture of, but it would have been Congolese man, shadow hands, and early bone teeth necklace, below. Again, the theme of separated body parts. Decoration, life, I don't know.
Then this one... (Close up of an Al Williamson hand.) Still disembodied parts. What are we looking at? To me, it's getting confusing... 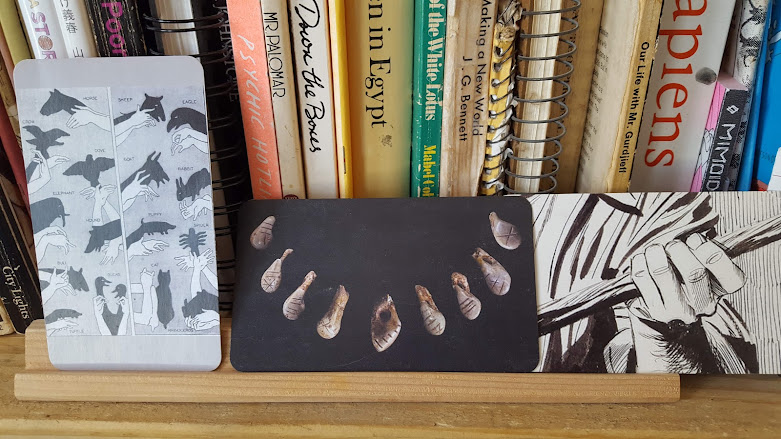 I lost a couple days, dispirited. Then picked it up 2 days later. A couple, a precarious fall (the only digitally altered card in the decks), and "tragedy". Yeesh, and after just moving with my family... 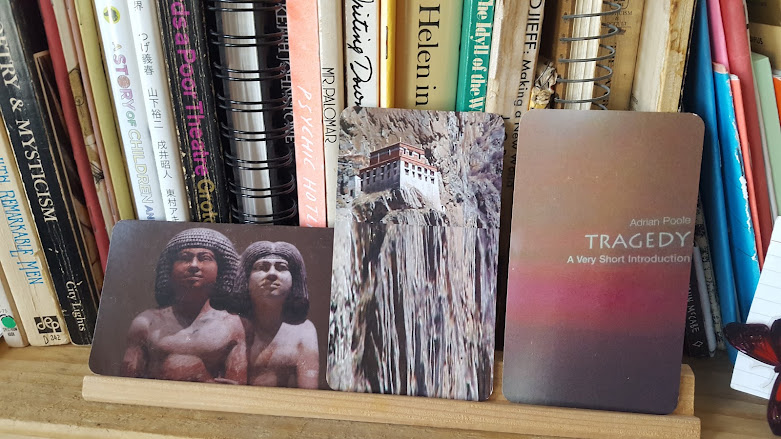 Here- the new final image, a boy in Kowloon, infamous tower/neighborhood of Hong Kong, making do, homework at a desk on a shelf, or something. Ok, another rejuvenation, rebirth, rededication? 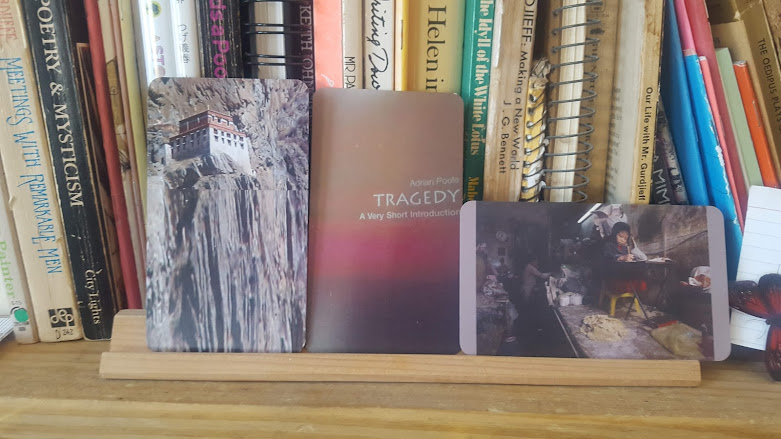 Now, we add pageant, ritual, theater. Not sure what this is yet... 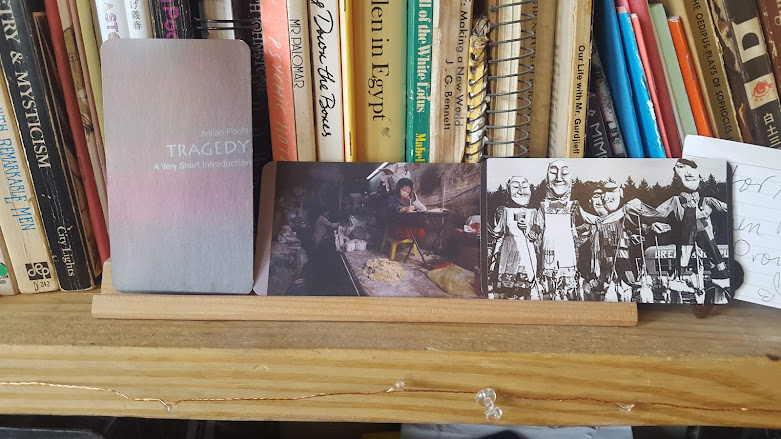 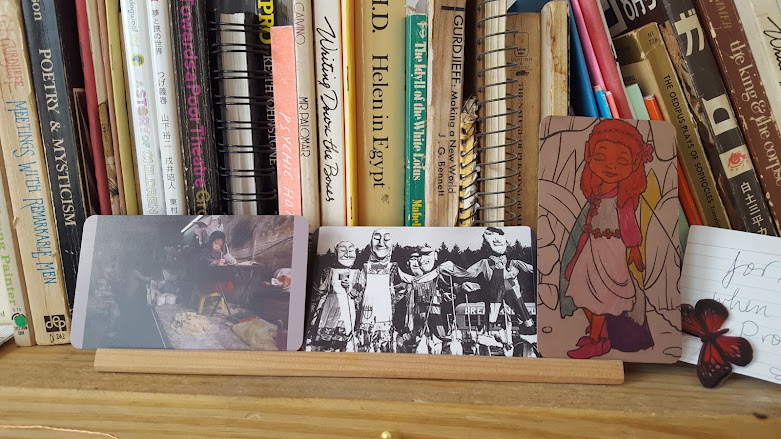 A would-be school shooter, hugged by the person who the teacher who disarmed him. Why this from theater and pageant? I let the images keep coming. 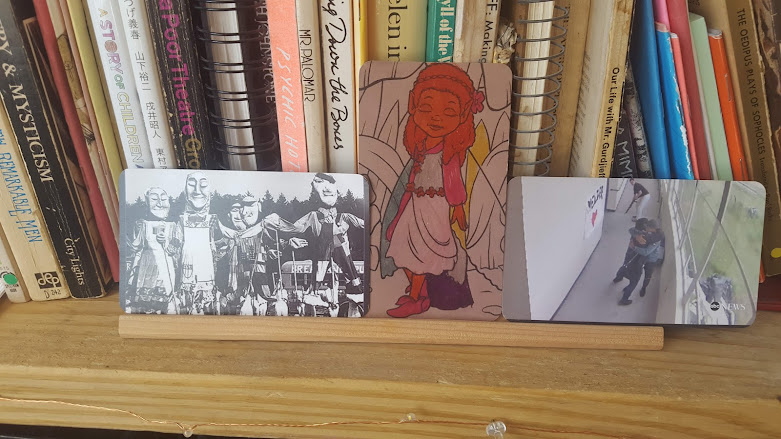 Guess I didn't take a pic the day before but you can infer it from the below. Now we have a new sequence, all horizontal, if that matters. Wrestling, hugging, dancing as a vegetable, war in the skies. No idea how to interpret... 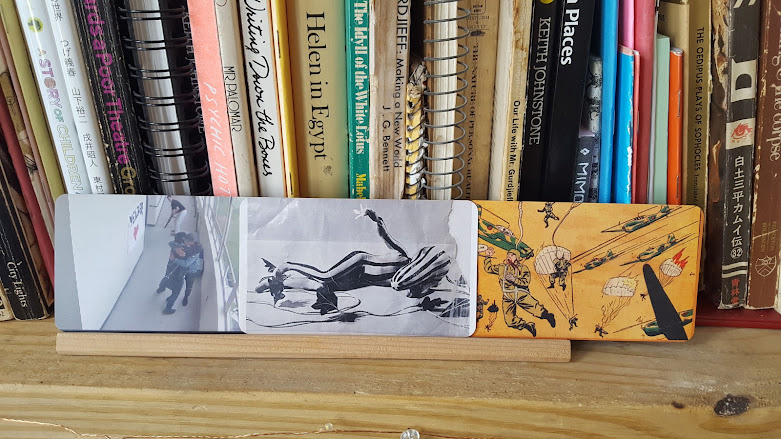 Still all horizontal, this is making more sense to me. Theater, new rituals, war, culture revolution (the last image from The Clash's London Calling.) 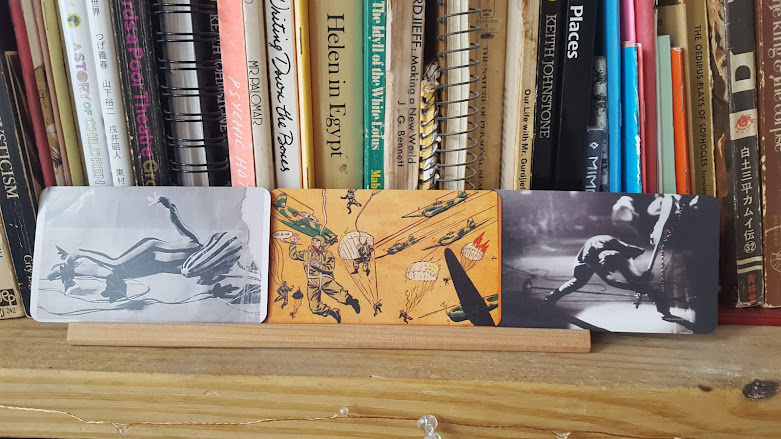 Lest we get too comfortable, we see our war and combat (rock) is deadening us. This is making sense. 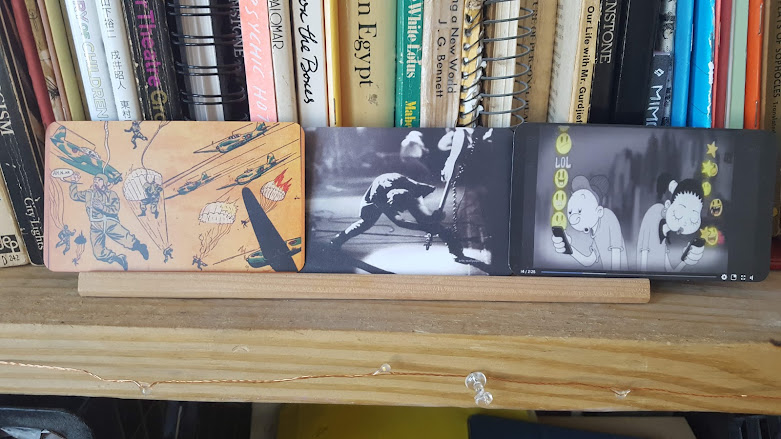 And then I lose the thread. Are we the herd of gazelles running away. What are we losing? Who is escaping? 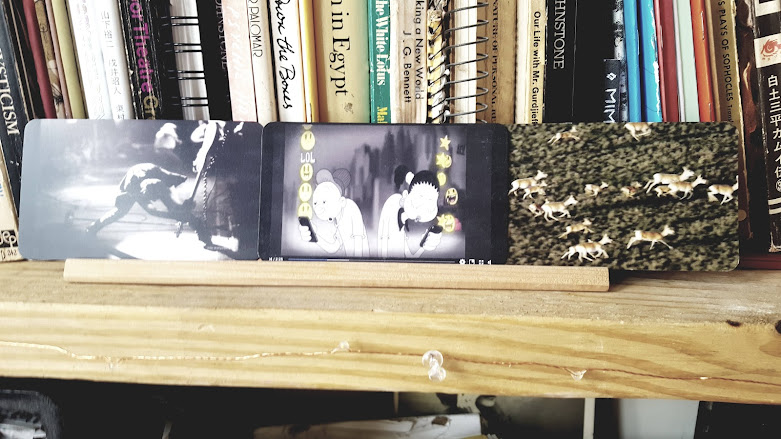 This card of semaphore confuses it more, but at least signals that some interpretation might be coming... 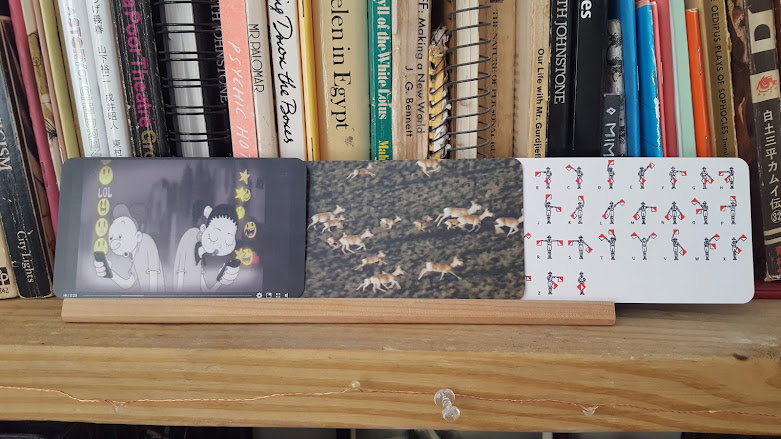 A car wash? No idea... Go the obvious route- a baptism? Rebirth? 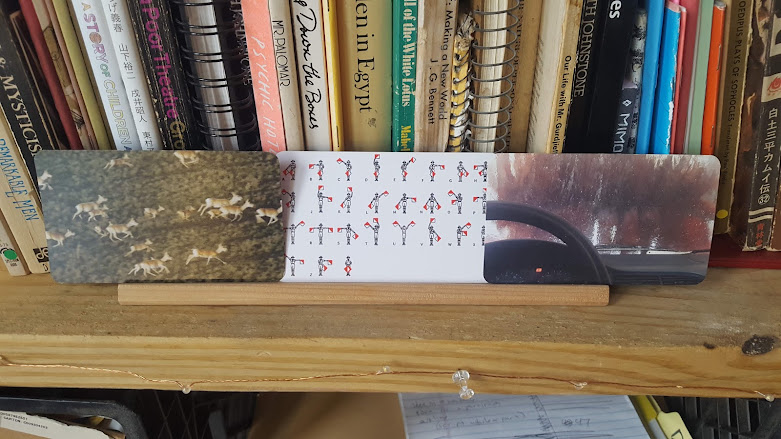 One of my favorite panels from Jeffrey Jones (among hundreds) emerges. The skeleton being adorned with jewels on its antlers. 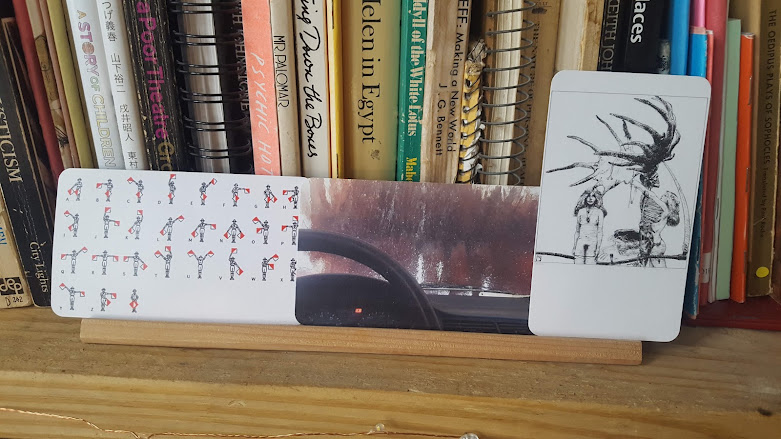 These two boys have huge electric crowns of hair above their heads here. I know from when I found the photo they are about to be struck by lightning. (I think they survived.) 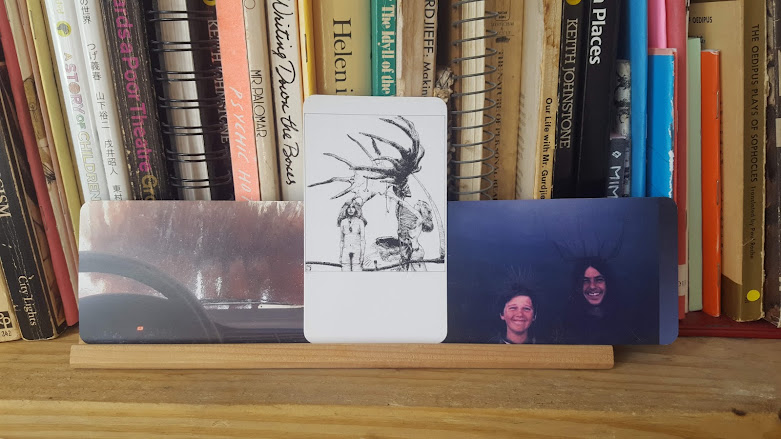 And today, Sept 5, this image from Julie Doucet stops me in my tracks. All three images, like a triptych: enormous, crowns above each of their heads. The skeleton antlers, the electric hair. the scissors like a gentle sword of Damacles. Doucet's violence was so joyous and simple, and these scissors and that alcohol, utterly celebratory. Thus, these boys, about to be crowned, electrified, super charged. 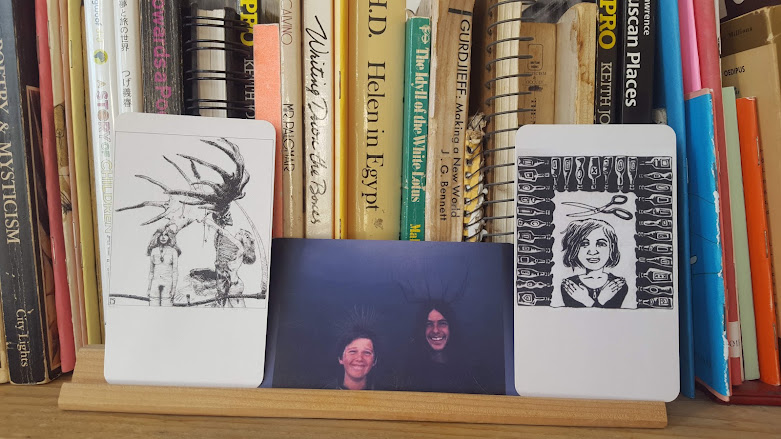 And below it, on my drawing board, more of this guy. 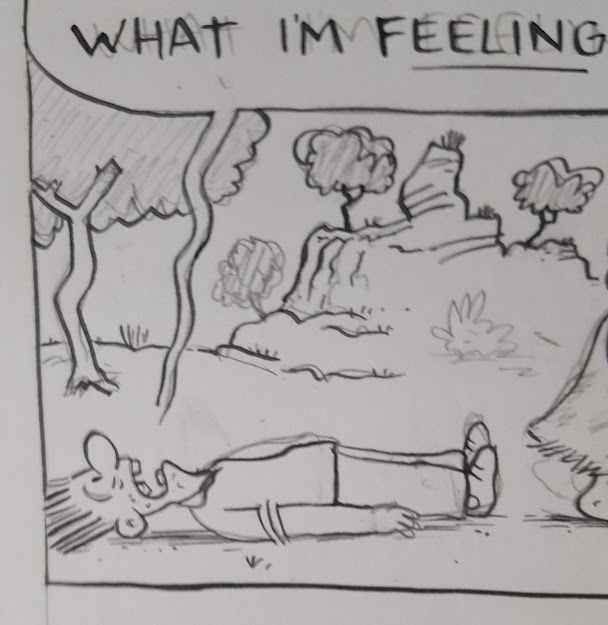 What can I learn from that triptych?