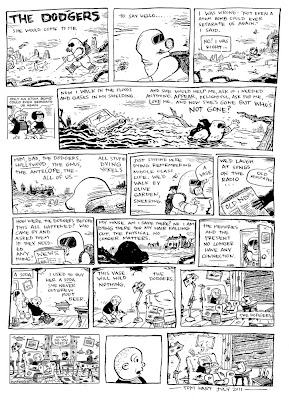 Josh Bayer is heading up an anthology of comics created from two Nancy panels. Here's mine.

I had a lot of fun aping Bushmiller, especially in the last panels. He draws schmutz and filth better than I had seen previously.

I was trying to channel my best ROM-era Josh Bayer here, but failed. Realized that I was still who I was, and I should just try bettering my own vocab than to ape someone else's.

Still like this strip very much. Thanks to Josh for prompting it.
Email Post
Labels: Ernie Bushmiller josh bayer Nancy