Tim Kreider on Stealing From Your Friends 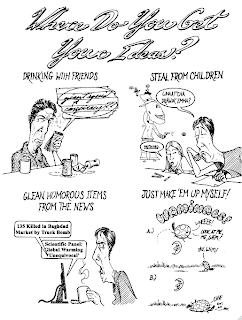 Actually creating art, like giving birth, is a painful, unsightly and ultimately solitary business, best done in private--but conception is necessarily more sociable, and way more fun. Nothing is ever created in total isolation. Here is how you come up with good ideas: cultivate friendships with people much smarter and funnier than you, spend hundreds of hours drinking and talking with them, and steal everything they say. Keep a little notepad and jot down every hilarious idea they come up with. Often you'll wake up to find cryptic and inscrutable items like "Giant Squid--CONSPIRACY???" scrawled in there, but sometimes you will find an idea that's worth preserving. And once in a while you get a gift from the Gods.

I'm being (kinda) facetious when I advocate stealing your friends' ideas. I'm not really recommending anything quite as lazy or straightforward as plagiarism. Being around smart, funny, creative people forces you to be smarter, funnier and more creative yourself, just to keep up. In your effort to impress and best them you better yourself. We've all been in a barroom or car full of friends all riffing on some joke, outdoing each other, trying to crack each other up. it's both a competition and a group collaboration. It's often impossible, in retrospect, to parse out which was whose idea, exactly; they were products of a group mind, quicker and more inventive than any one person's efforts. Just recently, in one of our late-night phone conversations, my friend Boyd and I came up with what sounds like the title of a bold manifesto, Beyond Pants. And at dinner this week some friends and I hit upon the name of a blockbuster that pretty much writes itself: Godzilla Dubai. This is the fruitful battlefield of creativity Nietzsche describes in "Homer's Contest." (Nietzsche, the loneliest of philosophers, wrote eloquently and often on this subject: "One seeks a midwife for his thoughts; another, someone he can assist. Here is the origin of a good conversation.")

Joseph Conrad, in his introduction to The Secret Agent, describes how an offhanded comment dropped by a friend of his in conversation and something he read in a book a week later somehow connected in his mind--he describes the experience as both "illumination" and "crystallization"--and inspired him to begin the novel. H.G. Wells and his brother Frank were walking in Surrey discussing the extermination of the aboriginal Tasmanians when Frank wondered aloud how the English would feel if beings from another world were to drop out of the sky and begin methodically laying waste to the countryside. Not long ago I had a conversation over breakfast with the author of this book, my friend and colleague Tom Hart, in which we got to talking about people we'd known who were habitually dishonest. I'd once had a friend who wasn't a pathological liar but made up a lot of stories and kept a lot of secrets. I'd resigned myself to never writing about him because there were certain secrets I felt bound to keep for him, even thought he'd been dead several years. But in describing him to Tom that it occurred to me that the things I was free to say about him were stranger and more interesting than I'd realized; that perhaps I could write an essay about him after all without revealing the things I didn't want to. Tom is an autodidact, bereft of the chronic boredom and incuriosity that are the gifts of a formal education; his urgent and insatiable interest in the world makes you feel more erudite and fascinating. Such people animate every conversation they enter into, giving even a rambling barroom talk focus and momentum; they make you realize you have something to say.

Even talking with ordinary people, if it can't possibly be avoided, is occasionally valuable. One of the first things I learned in college was that quite often you think you have no opinion on a subject until you listen to other people's stupid ideas and wrongheaded interpretations and realize that in fact you have very strong and peculiar opinions; you'd just mistakenly thought they were so obvious and sensible that they went without saying. Your inner thirteen-year-old who believes that Everybody in the World Is Stupid Except Me isn't actually as smart as s/he thinks and will make you very unpopular if allowed to mouth off uncensored, but that buried arrogance is necessary if you're going to presume on people's time and attention to tell them what you think about anything at all.

And let us not forget what is most important in life: the Ladies. The women I've loved most in my life are the ones in whose company, and for whose benefit, I've become the smartest, funniest, sanest and best version of myself. Impressing women (or men, or both, depending on your gender and orientation) is perhaps the main incentive in any kind of creative endeavor. As my therapist keeps telling me, kind of tiresomely, "Sublimation is the highest form of defense mechanism." (It seems to me like a paltry substitute for fucking, but you do sometimes get paid for it.) Even romantic disappointment and grudges can be powerful incentives; Tom and I once agreed, in a barroom converation, that 94% of all art in the history of the world was created to make some girl sorry. A novelist friend of mine told me an anecdote about giving a reading from her first novel in a bookstore where her first boyfriend, who was, humiliatingly, working as a clerk in that bookstore, approached her and actually admitted he'd read her book looking for any allusion to himself, and had found none. This story is to me as thrilling a tale of vengeance, in its small way, as The Count of Monte Cristo. Yes: we will show them. We will show them all. The night my book of essays sold to a major publisher, my girlfriend brought me five congratulatory cupcakes that said, in cursive icing, one word per cake: