Following Barney Banks. Roughs, ideas and worries up during the 2nd chapter

Trying to be transparent with the process of creating EXTRA LIFE. (on ACT-I-VATE, HERE) Most of these notes were written immediately after inking a page, or sketching some page, trying to document everything in my mind at the time. 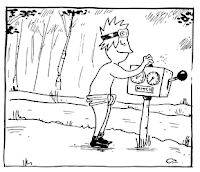 Off the project happily for two weeks while teaching in Hawaii. I barely thought about this, except for during the plane flight in, where I made these sketches. Mostly looking for other crazy characters to introduce into the gallery of youngsters hanging around the campground where Banks winds up. I want them surreal, funny, possibly avatar-like, something someone might design for a lousy video game.

Next I sketched a few thumbnails for the next pages. Thinking what needs to happen is the introduction of MITCH, the box with dials and a handle that assigns something, or predicts something, or changes something, I don't know. These thumbnails so tiny, I got excited thinking I was working like Brian Eno here, the way he would throw out syllables and rework them until they made words. These half-sketched stick figures were just potential movement, potential compositions. (See Mitch HERE in Act-I-Vate, page 12)

Next, I get down to drawing again.

Two new inked pages, inked quickly, I really don't know what's going on. This originally going to be a repeat- the characters both pulling the handle and changing instantly, but then what to do about that trail of paper receipts on the left side of Mitch? You can see from the margins (see sketches below) I thought- Banks picks it up, reads it; or other characters alternate and pick it up, or else maybe it gets left behind until much much later. I got bored with repeating the characters actions, and thought I should just have a character right now pull from the receipt, and then do something. I think one of the themes here is young people and their love of emo, animals, video games and other things I don't get.

I'm sure I've ruined it. It's got all this video game imagery in it that I absolutely hate. I don't hate my version of it, but what I am doing playing with it? I have no idea what's going on. Part 2 is finished, and is not the formalistic treat I thought, but it is something. I opted for silent, and a rigid page structure. But I have to stick with the fever dream. If I am going to hit my goal of believing in whatever this project wants to become, and in my finishing it before the end of the year, then I have to treat it like a fever dream. I don't know what's going on, but I will stay with it. I can only try to parse it out, reflect a little, and move through the story forward.